The Management team of the Niger Delta Development Commission, NDDC, has further demonstrated in action, its
commitment towards improving lives and empowering the people of Niger Delta for sustainable development of the region. 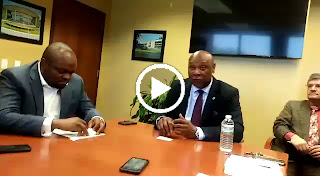 A delegation of the management team of the Commission led by the Acting Executive Director Finance and Administration, NDDC, Dr. Chris Oyirinda Amadi, engaged major institutions and organization in Houston, Texas, on collaborating and building effective partnership in the key areas of education, trade, health and human capital development for the people of the Niger Delta region.

Part of the partnership terms reached with the management of of Texas Southern University led by its Provost and Vice President, Dr. Kendall T. Harris, include the training of Niger Delta students in different areas of interest. In the area of Trade and Human Capital Development, Dr. Amadi and his team engaged the Director of Trade and International Affairs, Houston City Council, Mr. Christopher Olson on technology transfer and climate mitigation efforts. Also in the loop are efforts geared towards improving healthcare delivery in the entire Niger Delta region.

Priestley Nna,
SA on Communications to the Ag. EDFA, NDDC.

REMARKS BY GOV. HOPE AT THE COMMISSIONING OF ROADS IN OWERRI BY PROF. YEMI OSIBANJO