In continuation of the 5 hours special praise and worship/prayer session for the leader of APC in the South-South, Rt. Hon. Chibuike Rotimi Amaechi, other
members of the party, Rivers State and Nigeria at large.

Christian faithfuls drawn from across the 23 local government areas of Rivers State have on wednesday 1st May, 2019 converged for the second time in 10 days. 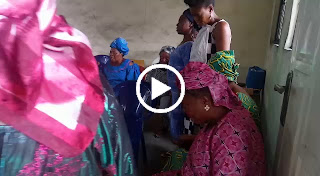 Members of the group as led by Miss. Chioma Worgu were engaged in a 5 hours non-stop praise, worship and prayer for leaders of the All Progressives Congress in Rivers State. Ogadinma Otobo who led the final prayer session amongst other request asked members of the group to pray for Grace in the life of Rotimi Amaechi.

In an an earlier report by newscrystal.com, Miss. Chioma Worgu spoke at length on the aim of organising the all important prayer session for the Party at both national and state, noting that there was a need to also pray for the Minister of Transportation and leader of APC in the South-South for good leadership and the sustenance of democratic gains.

Highlights of the prayer session was prayers and songs offered by Miss Chioma Worgu, Ogadinma Otobo and other leaders of the group.